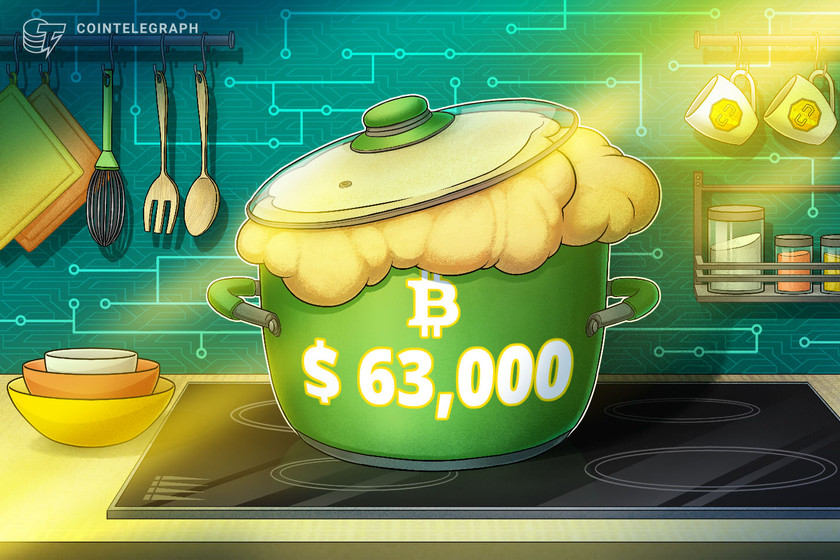 Crypto staking: How to pick the best staking coins for passive income

The price of Bitcoin broke above $63,000 to hit a new all-time high, and traders are mixed in the short term.

The price of Bitcoin (BTC) reached a new all-time high at $63,478 on Tuesday on Binance.

The market sentiment around Bitcoin and Ether (ETH) is overwhelmingly bullish, but the short-term sentiment remains mixed.

Analysts use the term “price discovery” when the price of an asset reaches a new all-time high.

On Tuesday, the price of Bitcoin entered price discovery, surpassing its record high as it made its way above $62,000.

When an asset enters price discovery, two scenarios could emerge: It becomes overbought and sees a severe correction, or it sees stronger technical momentum and rallies further.

While the momentum of Bitcoin is evidently strong, traders are mixed in the near-term trajectory of BTC.

Scott Melker, a cryptocurrency derivatives trader, said that the four-hour price chart of BTC has started to enter into overbought territory.

“Hidden bullish divergence printed a couple of candles ago, signaling continuation and invalidating the bear div. 4-hour RSI has finally reached overbought, let’s see how deep it can push.”

Atop the technical indicators show that Bitcoin could be overbought in the short term, while the futures market also remains extremely overcrowded.

Bendik Norheim Schei, the head of research at Arcane Research, said that the three-month premium on BTC futures contracts is reaching 50%.

Premiums in the futures market indicate whether the derivatives market is overheated with buyers. If the premiums are high, the risk of a severe sell-off as a result of investors taking profit increases.

Final leg of the bull rally?

According to Mohit Sorout, the founding partner of Bitazu Capital, there is a chance that Bitcoin is in the final leg of its uptrend. He said:

“Truth be told I seriously think we’ve entered the final leg of this $btc bull market. To be clear, final leg could be 2-3 weeks or even more. Price could reach 200k or even more who knows. Just don’t make irrational life decisions based on unrealized PnL.”

However, there is also a strong possibility that Bitcoin does not top out like it did in 2017. Rather, it could range and consolidate for a long time after it peaks, similar to gold in its early days.

0
0   0
previous OptionRoom Listing on AscendEX
next Copyright infringement and NFTs: How artists can protect themselves