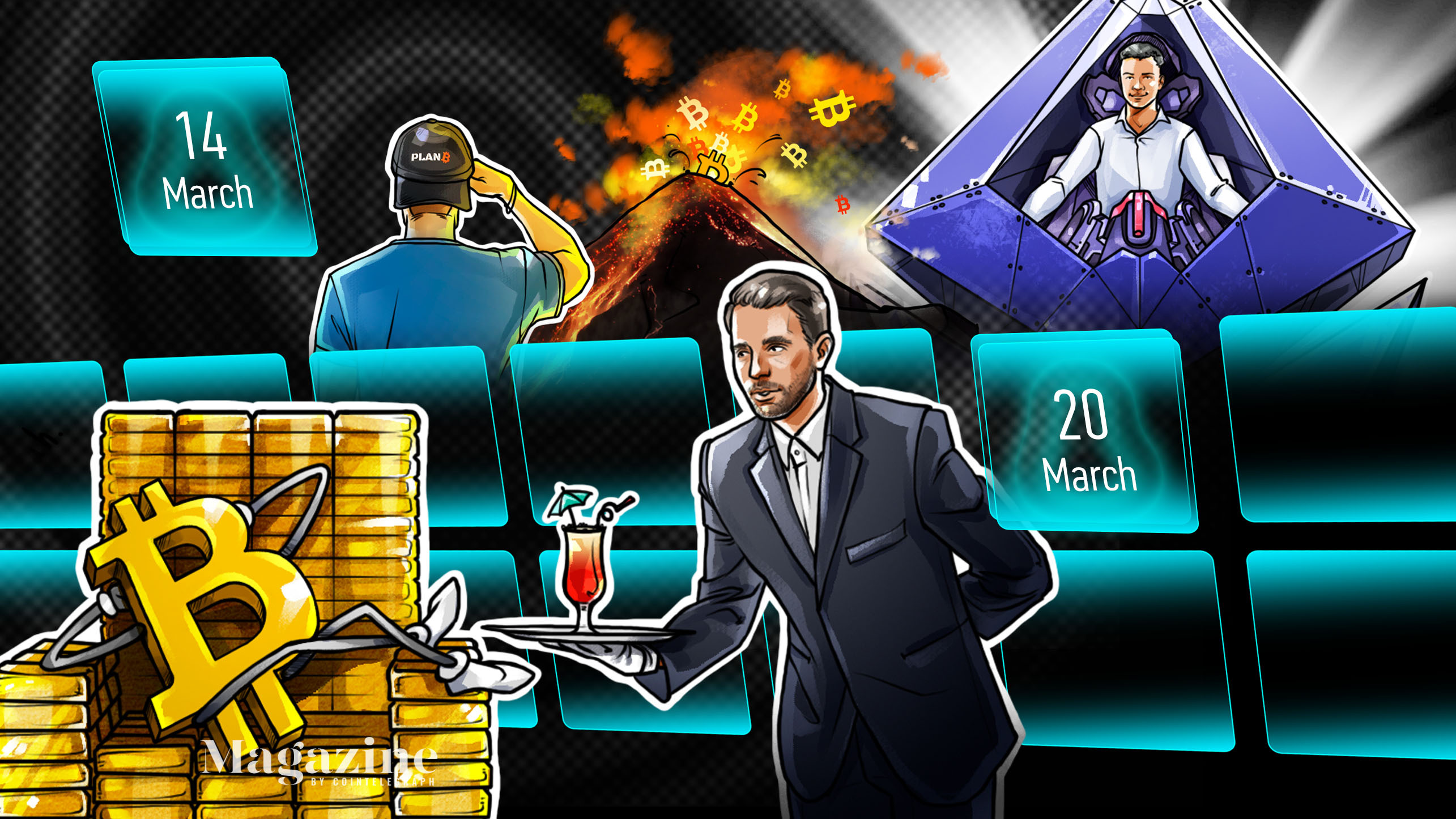 Bitcoin dazzled us all last Saturday with a dramatic surge to new all-time highs at $61,683.86. But the market spent little time in record territory, with a sharp pullback taking prices to lows of $53,555.03 by Tuesday. Although BTC has recovered to some extent, it is now facing strong resistance at the $60,000 level.

CrossTower head of trading Chad Steinglass said some resistance is to be expected, and once these levels are surpassed, they become support. He added: It will take a bit of chipping away to break through $60,000 with any kind of authority.

But its worth taking a moment to reflect on Bitcoins progress. As Cointelegraph Markets analyst Michal van de Poppe notes, BTC has accelerated from $11,000 to $60,000 in just six months. He believes $60,000 is the final key resistance level before the next impulse wave toward $68,000 can happen.

Speaking to Cointelegraph, eToro CEO Yoni Assia explained that a confluence of circumstances is contributing to the current bull run, including the economic situation in the U.S. sparked by the coronavirus pandemic. Kraken growth lead Dan Held added that BTC is currently experiencing a supercycle that could propel it all the way to $1 million and described it as a one in 100-year moment.

The institutional banking powerhouse Morgan Stanley caused a stir this week when reports suggested it is going to give clients access to Bitcoin investing a big nod of approval.

CNBC reported that the U.S. bank is launching access to three crypto funds but only under specific conditions. Its only open to clients who carry accredited investor status and hold more than $2 million in capital at Morgan Stanley and even then, theyll only be able to allocate 2.5% of their overall wealth to these funds.

Theres been a flurry of reaction to Bitcoin from other financial institutions this week, with Deutsche Bank saying BTCs $1-trillion market cap has made the cryptocurrency too important to ignore.

According to JPMorgan Chase, retail traders are flocking to buy BTC from mainstream fintech firms. Its data suggests that consumers have purchased more than 187,000 BTC from the likes of PayPal and Square this quarter, outpacing institutions, which have snapped up 173,000 BTC over the same period.

As youd expect, not everyone is impressed. Bank of America analyst Francisco Blanch slammed Bitcoin as exceptionally volatile, impractical and environmentally disastrous. He was especially unimpressed by how BTC can only handle 1,400 transactions per hour, while Visa can handle 236 million.

Coinbase has registered 114,850,769 shares of Class A common stock ahead of its direct listing on the Nasdaq. An updated S-1 filing with the U.S. Securities and Exchange Commission suggests a volume-weighted average price per share of $343.58.

Other platforms that also offer crypto trading have also been making moves this week. On Tuesday, eToro announced that it is planning to merge with a blank check firm and go public with a valuation of $10.4 billion.

Kraken is yet to confirm whether it will follow in Coinbases footsteps, but in a statement to Cointelegraph, it ruled out using eToros approach, which involves being acquired by a company already listed on a stock exchange. We are too big to go that route, a representative told us.

Robinhood another company that has been exploring an IPO has also revealed that it is planning to expand its crypto trading service as fast as possible. But in a fireside chat on YouTube, CEO Vlad Tenev admitted it may take a few months for the company to recover from the GameStop trading saga.

Cointelegraph has started a brand-new series called Nifty News that offers a neat round-up of the biggest developments in NFTs. Here are a few of our favorite developments from the space this week.

MetaKovan, the mysterious bidder who acquired Beeples Everydays: The First 5000 Days piece for a cool $69.3 million, has been unmasked as Vignesh Sundaresan. Prior to founding Metapurse, he created the crypto exchange Coins-e and co-founded the crypto ATM project BitAccess.

Elsewhere, the blockchain-based sports platform Chiliz has enjoyed an extraordinary surge of late, with its altcoin surging by 1,650% in the space of two weeks a performance that puts Bitcoin and Ether to shame.

Even though one of the main selling points of NFTs lies in how they are non-divisible, projects that aim to fractionalize these tokens have been gaining steam. Owning just a portion of a piece of digital art is becoming more appealing to collectors, and it could allow NFT holders to realize some liquidity from their assets without selling the entire piece.

And last but not least, toilet paper is back in the news. The bog roll brand Charmin has created five types of nonfungible token paper accompanied by a physical display for lucky owners. An auction has been taking place on Rarible, with all proceeds going to charity.

Forget Tesla CEO Elon Musk has been promoted. According to a new SEC filing, the billionaire should now be referred to as Technoking of Tesla.

His chief financial officer, Zach Kirkhorn, has also been given a promotion to Master of Coin. Both men are going to retain their respective positions.

Musk has reason to celebrate, with figures suggesting that Tesla has been sitting on close to $19 million in unrealized profit per day since announcing its $1.5-billion Bitcoin purchase. This almost eclipses the $721 million in profit it made from selling 500,000 cars in 2020.

The billionaire also waded into the trendy world of nonfungible tokens this week when he announced he was planning to sell a musical NFT, with lyrics based on the hype surrounding the technology Its verified, its guaranteed. Very catchy.

NFT art is so hard to explain because it doesnt make sense.

Bitcoin has also become correlated to risk assets, it is not tied to inflation, and remains exceptionally volatile, making it impractical as a store of wealth or payments mechanism.

Sometimes a better bathroom experience goes beyond the seat, thats why were rolling out the first-ever NFT art by a toilet paper brand.

If Kraken would decide to go public, it would do so through a direct listing and not through a SPAC as we are too big to go that route.

Collectors who are buying NFTs with their cryptocurrency gains could face large tax bills this year for deals that most probably thought were tax free.

Bitcoin is the preferred investment choice among check recipients.

Effective as of March 15, 2021, the titles of Elon Musk and Zach Kirkhorn have changed to Technoking of Tesla and Master of Coin, respectively.

PlanB has doubled down on his stock-to-flow Bitcoin price model once again, arguing that Bitcoin has plenty of room to grow in its current bull run and will not stop at $100,000.

Many investors have been curious about where the 2021 bull run may end. Depending on the price indicator used, the peak could be uncomfortably near or still far off. But for followers of stock-to-flow, the answer remains firmly the latter: Compared with previous bull cycles, 2021 is just getting started.

PlanB says December is a realistic deadline for BTC to hit $288,000 and says Bitcoins price is following his model like clockwork. He added that this forecast is just an average, meaning the peak of this cycle could be double those figures or even more.

We are only 3.5 months into the Bitcoin bull market, he wrote.

Two decentralized finance projects were targeted by a DNS spoofing attack on Monday.

Cream Finance and PancakeSwap, both deployed on Binance Smart Chain, were affected by the phishing incident.

In Creams case, a fake window loaded where users were asked to input their private key. There are almost no occasions when a user should input their seed phrase into a browser app, especially not when interacting with DeFi.

Both websites appear to be registered through GoDaddy. One possible explanation is that the teams accounts on the provider were hijacked, allowing the attacker to officially change the DNS routing point for the domains.

Each project stressed that funds were safe as long as users didnt type in their private keys, and both managed to later regain control of their websites.

Lawyers negotiating on behalf of Arthur Hayes, who is one of the four BitMEX executives accused of violating the Bank Secrecy Act, have finalized the terms of his proposed voluntary surrender to a Hawaii court on April 6.

The proposed bail conditions, which are subject to the courts approval, stipulate that Hayes, who has lived in Singapore since January 2020, would potentially be released on a $10-million personal recognizance bond, secured by $1 million in cash and co-signed by his mother.

Further proposed conditions include Hayes retention of a passport for travel between Singapore and the U.S. and his execution of a waiver of extradition in a form that would be mutually agreed upon by the government and Hayes defense.

A judge has denied a motion filed over the weekend on behalf of more than 6,000 XRP holders, who were attempting to insert themselves as third-party defendants in the SECs case against Ripple.

The motion to intervene argued that the interests of tokenholders in this case, the XRP Army were not being adequately represented in the lawsuit against Ripple and its executives.

Lawyer John Deaton had claimed that XRP holders had suffered $15 billion in losses following the SECs announcement of its lawsuit against Ripple, which caused the altcoin to crash.

U.S. District Judge Analisa Torres denied the motion without prejudice, meaning that lawyers representing XRP investors may be able to refile in the future.

Not just for gamers and fanboys: Why investors should take NFTs seriously

Some people are making a mint out of NFTs, and almost everyone can try their luck and experience the emerging niche.

Predicting the direction of Bitcoins price is not gonna cut it with the worlds 2.7 billion gamers.