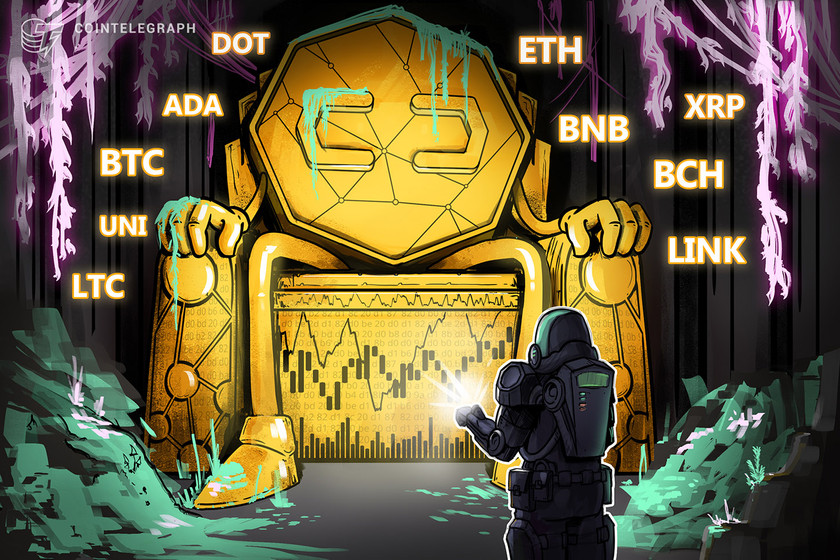 Several altcoins are moving to new all-time highs as bulls struggle to lift Bitcoin price above $60,000.

A report by Deutsche Bank Research said that Bitcoin (BTC) has become “too important to ignore” and may attract regulation by the end of 2021. Deutsche Bank analysts expect Bitcoin to reach a turning point in about “two or three years” when it will be clear whether Bitcoin will evolve into an asset class or not. In the short term, the report forecast Bitcoin to “remain ultra volatile.”

A different report by Bank of America provided some insight into the possible reasons for Bitcoin’s volatility. Bank of America analysts estimated that Bitcoin price may rise by one percent when there is a $93 million inflow. Compared to that, gold needs about $2 billion worth of funds to move it by a single percentage point.

This large disparity in the price reaction to the inflow of funds is attributed to Bitcoin holders who have not parted with their coins during the current bull run.

While it is difficult to predict at what price the Bitcoin whales will book profits on their holdings, Kraken growth lead Dan Held said in a recent interview with Cointelegraph that Bitcoin could reach $1 million during the current supercycle.

Held believes that the confluence of events such as the coronavirus crisis, money printing by central banks and the rising lack of trust in legacy financial firms are the triggers supporting the crypto bull run.

Let’s study the charts of the top-10 cryptocurrencies to determine whether the uptrend will resume or is the bull run showing signs of exhaustion?

The upsloping moving averages and the relative strength index (RSI) in the positive zone suggest the path of least resistance is to the upside. A break above $61,825.84 could start the next leg of the uptrend to $72,112.

Although the RSI is showing negative divergence, traders should follow the price action closely because a sharp rally from the current levels may invalidate this bearish development.

If the price turns down and breaks below the 20-day EMA, it will be the first sign of weakness. A deeper correction could be signaled if the bears sink and sustain the BTC/USD pair below the 50-day simple moving average ($48,578).

Ether (ETH) has been trading just above the 20-day EMA ($1,756) for the past three days. This is a positive sign as it shows that the bulls are accumulating on dips to the 20-day EMA.

The moving averages are sloping up and the RSI is in the positive territory, suggesting the bulls have a slight edge.

However, this positive assumption will be negated if the price turns down and breaks below the moving averages. Such a move could pull the price down to $1,289 and keep the pair range-bound for a few more days.

Binance Coin (BNB) has successfully held the 20-day EMA ($251) for the past four days but the bulls are struggling to push the price above $280 and challenge the overhead resistance at $309.50.

However, the 20-day EMA is sloping up gradually and the RSI is in the positive zone, which shows a minor advantage to the bulls. A breakout and close above $309.50 will complete a bullish ascending triangle pattern. This setup has a target objective at $429.

On the contrary, if the price turns down from the current level and breaks below the trendline of the triangle, it will suggest the bears have overpowered the bulls. That could result in a drop to $189.

Cardano (ADA) turned down from the all-time high at $1.48 on March 18 as traders booked profits. However, the positive sign is that the bulls are attempting to defend the breakout level at $1.23.

A strong bounce off the current level could increase the possibility of a break above the all-time high. The next target objective on the upside is $2.

The rising moving averages suggest the bulls are in command, but the negative divergence on the RSI shows the momentum is weakening.

If the bears can pull the price below the 20-day EMA ($1.14), it will indicate that supply exceeds demand. The trend may turn in favor of the bears if the ADA/USD pair plummets below the 50-day SMA ($0.94).

Polkadot (DOT) has been sustaining above the 20-day EMA ($35) for the past two days, which is a positive sign. The bulls are currently trying to push the price above the resistance line of the symmetrical triangle.

If they succeed, it could resume the uptrend. The bulls may face stiff resistance at the all-time high at $42.28 but if they can thrust the price above it, the DOT/USD pair could rise to the pattern target at $55.

The 20-day EMA is moving up gradually and the RSI has risen above the downtrend line, which shows the bulls are attempting to gain the upper hand. This view will invalidate if the pair turns down and breaks below the support line of the triangle.

XRP has been trading in a tight range for the past few days as the bears are defending the overhead resistance at $0.50 and the bulls are buying on dips to $0.42. The flat moving averages and the RSI just above 52 suggest a balance between supply and demand.

Usually, a tight range trading is followed by a trending move. In this case, if the bulls can propel the price above $0.50, the XRP/USD pair could rally to $0.65 where it is again likely to counter stiff resistance from the bears.

Alternatively, if the bears sink the price below $0.42, the pair could drop to $0.36. This is a critical support to watch out for because a break below it could intensify selling and clear the path for a slide to $0.25.

Uniswap (UNI) is in an uptrend and it has been holding above the 20-day EMA ($29.41) for the past few days, which shows the bulls are buying the dips to this support. If the bulls can push the price above $32, a retest of the all-time high at $34.92 is possible.

A breakout and close above the all-time high could start the next leg of the uptrend that may reach $46. The upsloping moving averages suggest that bulls are in control but the negative divergence on the RSI warrants caution.

If the bears sink and sustain the price below the 20-day EMA, it could signal the start of a deeper correction. The first stop could be the 50-day SMA ($24.78) and if this support also cracks, the decline may extend to $22.

The bulls are attempting to keep Litecoin (LTC) above the 20-day EMA ($199.41). If they succeed, the altcoin could move up to the resistance line of the symmetrical triangle where the bears are likely to mount a stiff resistance.

However, if the bulls manage to propel the price above the triangle, it will suggest a resumption of the next leg of the uptrend. The first stop could be $246.96 and if this level is crossed, the LTC/USD pair could rally to $300.

The gradually upsloping moving averages and the RSI in the positive zone indicate a minor advantage to the bulls. This positive view will invalidate if the price turns down and breaks below the triangle.

Chainlink (LINK) once again turned down from the overhead resistance on March 18, which shows the bears are defending this level. However, the positive sign is that the bulls did not allow the price to dip below the 50-day SMA ($28.38), indicating buying at lower levels.

The LINK/USD pair has formed an ascending triangle pattern that will complete on a breakout and close above $32. This setup has a target objective at $43.20.

Contrary to this assumption, if the price turns down from the current level or the overhead resistance and breaks below the trendline of the triangle, it will invalidate the bullish setup. That could result in a drop to $24 and then to $20.11.

The bulls and the bears are battling it out to gain the upper hand in Bitcoin Cash (BCH). Although the price had dipped below the moving averages for the past four days, the bears could not capitalize on the situation. This suggests selling dries up at lower levels.

The flat moving averages and the RSI just above the midpoint suggest the BCH/USD pair could remain range-bound for a few more days.

If the consolidation resolves to the downside and the price closes below $500, the pair could start a deeper correction to $440 and then to $320.

0
0   0
previous Bullishness for Bitcoin continues despite its struggle to reclaim $60,000
next Polygon (MATIC), SKALE (SKL) and SushiSwap (SUSHI) are launching on Coinbase Pro