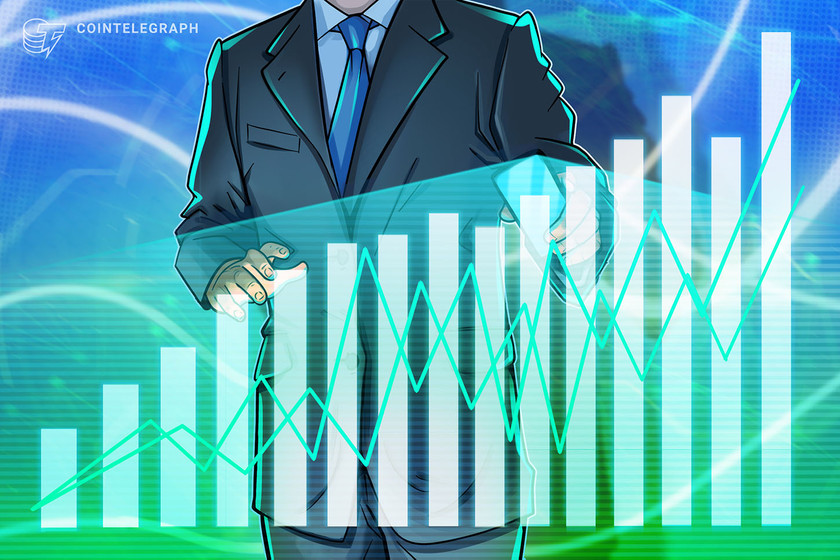 The growing need for data privacy and a renewed interest in the DeFi sector back the strong rallies seen in Dent, Arweave and Enzyme.

According to a report by Coinshares, as of March 20, the weekly inflows into institutional crypto products has declined by about 59% when compared with the previous week. This suggests that institutional investors are taking a cautious approach after the recent bull run.

However, that does not mean the institutional investors are dumping their holdings just yet. The report highlights that the total assets under management of crypto investment products hit a new high at $57 billion.

While the crypto bull market is still intact, a report by Glassnode suggests it could be entering into its later stages. The on-chain analytics provider believes that Bitcoin’s (BTC) “wealth transfer” from long-term investors to new entrants is in process.

Glassnode is not the only one to sound a warning on the maturing bull market. Chinese mining pool BTC.top CEO Jiang Zhuoer is projecting the bull market to end by September.

However, untill then, several tokens could provide attractive returns to investors. Let’s study the fundamentals and the charts of three such tokens.

Dent Wireless calls itself the first digital and mobile operator. It aims to help users take control of their mobile data and allow them to share the unused data with other users instead of allowing it to lapse. According to a company YouTube video, the firm claims to have more than 26 million users in over 80 countries providing data for eSIM capable devices.

On Jan. 14, the firm teased a launch of a reseller portal with a developer API sometime in the first quarter of 2021. In another post on its website, the company highlighted the expected milestones for this year, which includes a new mobile app, a reward system and optimized network connectivity for the Tokyo Summer Olympics. However, regular updates regarding these seem to be missing on its official Twitter account.

Another rumor making the rounds in the Reddit community is the possible partnership between Dent and Elon Musk’s Starlink; but again, there is no official confirmation of any deal.

During bull markets, several tokens that have been left for dead tend to come out of their graves as market speculators pump them. However, when the bull market hits a hurdle, investors who only buy the rumor or invest in the hope of making huge profits are left with worthless coins in their hands.

Therefore, investors should do thorough research, buy into projects that are transparent and stay clear of the ones that only give hope year after year without sharing any details with their community.

Dent Wireless’ DENT token has been in a strong bull run in the past few days. It has risen from an intraday low at $0.0048 on March 19 to an intraday high at $0.0149 on March 24, a gain of 206% in five days. The rally has pushed the relative strength index (RSI) above 94, suggesting the token is hugely overbought in the short term.

The long wick on today’s candlestick suggests traders are booking profits at higher levels. This means the DENT/USD pair could be ripe for a correction or consolidation. The first support on the downside is the 38.2% Fibonacci retracement level at $0.0104.

If the bulls can defend this level, it will suggest that traders are not rushing to the exit, and that will increase the possibility of a resumption of the up-move. If the bulls can push the price above $0.0149, the rally could extend to $0.0223.

Data storage is a lucrative business, hence most of the top companies such as Amazon, Alibaba and Microsoft are involved in it. However, with centralized companies, users have to blindly accept their policies and hope the company will not go out of business and that they also use proper security measures to safeguard the data.

This is where Arweave enters, as it stores data in a decentralized manner and asserts that it will be stored forever. This gains importance during the current nonfungible token (NFT) mania where buyers are paying top dollars to buy NFTs of their choice. If the NFT is lost due to any reason, it will incur a huge loss to the buyer. Therefore, Arweave’s claim of permanent storage may look attractive for NFT owners.

Arweave’s permaweb has more than 1 million pieces of data permanently stored in it, and about 200 apps have been built on it. To boost growth further, on March 5, the protocol announced that it had secured additional funding of $8.4 million from Andreessen Horowitz, Union Square Ventures and Coinbase Ventures.

The Arweave network upgraded to a new type of consensus mechanism on Feb. 24 called “succinct proofs of randomaccess,” which the company claims is more decentralized and less energy-consuming than classic proof-of-work networks.

The network’s AR token has risen from an intraday low at $8.60 on March 1 to an intraday high at $25.06, a 191% rally in 22 days. However, the bulls are struggling to sustain the price above $22, as seen from the long wicks on the candlesticks in the past few days.

On the downside, the bulls are attempting to keep the price above $19.50. But if this support cracks, the AR/USD pair could drop to the 20-day exponential moving average (EMA) of $16.62. This is an important support to watch out for because the price has not stayed below the 20-day EMA for more than two consecutive days since Jan. 1.

If the pair again rebounds off the 20-day EMA, it will suggest that the sentiment remains bullish and traders are accumulating on dips. If the bulls can push the price above $25.06, the pair could rally to $30.

Contrary to this assumption, if the bears sink and sustain the price below the 20-day EMA, then the pair could extend its fall to the 50-day simple moving average ($11.21). Such a move could signal a possible change in trend.

Decentralized finance (DeFi) has been at the forefront of crypto adoption in the past few months, and several protocols have sprung up that claim to offer investors the best features. For a trader with limited experience, it is difficult to track the large number of protocols and use them based on their advantages.

The Enzyme team announced plans to add new features in its next release, named Sulu. The new upgrade is expected to facilitate borrowing, transferability and several other features.

As part of the upgrade, Enzyme announced on March 18 that it will support deposits on Aave, enabling access to attractive yields for the users. Enzyme has also initiated a gas subsidy program for the entire month of March to reduce the burden caused due to Ethereum network’s high fees.

However, the bulls are struggling to sustain the higher levels, as seen from the long wick on Wednesday’s candlestick. This shows that traders are booking profits on rallies. The MLN/USD pair will now retest the breakout level at $83.

If the bulls can flip this level to support, it will act as a new floor. The buyers will then try to push the price above $111.11. If they succeed, the pair could rally to $128.67.

Alternatively, if the bears sink and sustain the price below $83, it will suggest that the markets have rejected the higher levels. That could trap several aggressive bulls who may rush to the exit and extend the decline to $65.44.