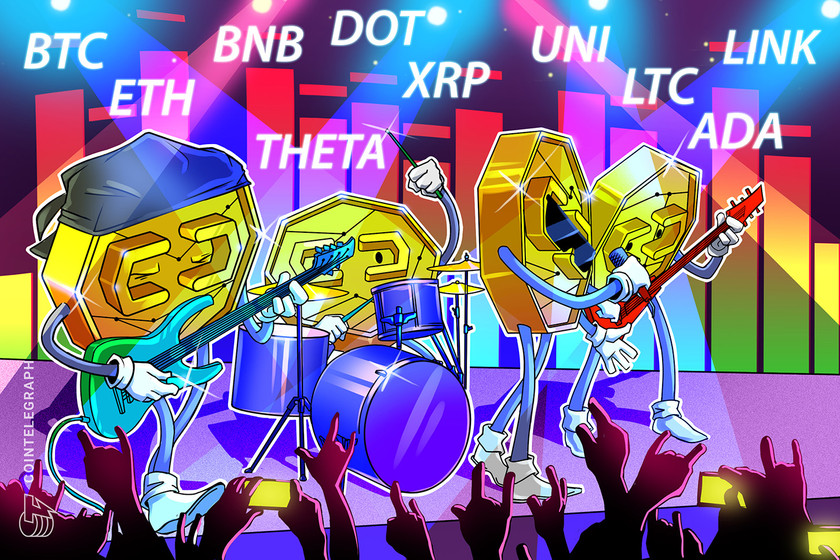 Bitcoin’s renewed push above the descending channel trendline suggests bulls are preparing to push BTC and altcoins to new highs.

On Monday Visa announced that it had launched a pilot program with Crypto.com to enable its partners to settle fiat transactions by sending USD Coin (USDC) stablecoin to Visa’s Ethereum address at Anchorage digital bank. This step by Visa shows that legacy finance companies are increasing their adoption of cryptocurrencies.

According to a PwC report reviewed by Bloomberg, crypto mergers and acquisitions soared to $1.1 billion in 2020 compared to $481 million in 2019. The increase in these deals is likely to surpass the 2020 numbers on every single metric with the arrival of large investors and institutional players according to PwC global crypto leader Henri Arslanian.

Several investors who had previously been critical of cryptocurrencies are gradually taking the plunge. The latest to join is the Norwegian billionaire investor Øystein Stray Spetalen, who went from a Bitcoin (BTC) basher to a crypto adopter within one month. Spetalen recently announced that he has joined the board of Norway’s top domestic crypto exchange MiraiEx and also purchased an undisclosed amount of Bitcoin.

The arrival of new investors has increased the demand whereas the HODLers sitting tight with their holdings has reduced the supply. Could this result in the resumption of the uptrend? Let’s analyze the charts of the top-10 cryptocurrencies to find out.

Bitcoin has broken out of the resistance line of the descending channel. If the bulls can sustain the price above the channel, it enhances the prospects of a retest of the all-time high at $61,825.84.

However, the bears are unlikely to give up easily. They are likely to pose a stiff challenge at $61,825.84. If the BTC/USD pair turns down from this level but stays above the 20-day EMA, it will suggest the sentiment remains bullish as traders are buying the dips.

A break below the 50-day simple moving average ($52,376) will be the first sign that bears are making a comeback.

Ether (ETH) continues to trade inside the symmetrical triangle, which usually acts as a continuation pattern. The bulls have pushed the price above the moving averages today, indicating strong buying at lower levels.

The buyers will now try to push the price above the downtrend line of the triangle. If they manage to do that, the ETH/USD pair could move up to $2,040.77 and then to the pattern target at $2,618.14.

On the contrary, if the price turns down from the downtrend line, the pair could extend its stay inside the triangle for a few more days.

The indicators are giving a mixed signal. While the flat moving averages suggest a few more days of range-bound action inside the triangle, the RSI above 57 suggests the momentum is picking up in favor of the bulls.

The bulls pushed Binance Coin (BNB) above the downtrend line on March 27. The 20-day EMA ($256) has started to turn up and the RSI is in the positive territory, suggesting the bulls are trying to gain the upper hand.

There is a minor resistance at $280 but the bulls are likely to push the price above it. If they do that, the BNB/USD pair could rise to $309.50 where the bears may mount a stiff resistance. If the price turns down from this resistance, the pair may spend a few more days in consolidation.

Conversely, if the bulls can thrust the price above $309.50, a retest of the all-time high at $348.69 is possible. A breakout of this resistance will suggest the resumption of the uptrend, which has a target objective at $430.

The 20-day EMA is rising gradually and the RSI is in the positive territory, indicating a minor advantage to the bulls. If the bulls can propel the price above $1.30, the ADA/USD pair could rally to $1.48. A breakout of this resistance could start the next leg of the uptrend that may reach $2.

This positive view will be negated if the price turns down and breaks below the $1.03 support. Such a move could open the doors for a decline to $0.80.

Polkadot’s (DOT) rebound off the $26.50 support has risen above the 20-day EMA ($34) today. This suggests the bulls have overpowered the bears and will now try to push the price to the downtrend line.

If the bulls can drive the price above the downtrend line, the DOT/USD pair may retest the all-time high at $42.28. A breakout of this resistance could open the doors for a rally to $53.50.

On the other hand, if the price turns down from the downtrend line, the pair could remain stuck inside the $26.50 to $40 range for a few more days. A break and close below $26.50 could start a deeper correction.

XRP formed an inside day candlestick pattern on March 27 and a Doji candlestick formation on March 28, both indicating indecision among the bulls and the bears. Today, the bulls are trying to resolve the uncertainty in their favor.

If the bulls can propel the price above $0.58, the XRP/USD pair could rally to $0.65. There is a minor resistance at $0.60 but that is likely to be crossed. The upsloping moving averages and the RSI above 61 suggest the bulls have the advantage.

The pair is likely to pick up momentum after breaking above the $0.65 resistance. Contrary to this assumption, if the price turns down from the current level and breaks below the moving averages, a drop to $0.42 is possible.

If the buyers can sustain the price above the 20-day EMA, it will suggest the recent break below $27.97 on March 24 was a bear trap. The UNI/USD pair could then gradually move up to the overhead resistance at $35.20.

A breakout of the $35.20 to $36.80 overhead resistance zone could start the next leg of the uptrend. Alternatively, a break below $25.52 may indicate the start of a deeper correction. Until then, volatile range-bound trading is likely to continue.

THETA is consolidating between $14.96 and 10.35. In an uptrend, when the correction stalls at the 38.2% Fibonacci retracement level, it shows that traders are not rushing to the exit but are buying on dips.

The upsloping moving averages and the RSI in the overbought zone suggest the path of least resistance is to the upside. If the bulls can drive the price above $14.96, the THETA/USD pair may start its journey toward $19.

On the contrary, if the price turns down from $14.96, the pair may extend its stay inside the range. The bears will have to sink the price below the 20-day EMA ($9.81) to gain the upper hand.

Litecoin (LTC) broke below the symmetrical triangle on March 24 but the bears could not capitalize on this advantage. The bulls pushed the price back into the triangle on March 26 and this could have trapped several aggressive bears.

If the price turns down from the resistance line, the LTC/USD pair could extend its stay inside the triangle for a few more days.

However, if the bulls drive the price above the triangle, the pair may rally to $246.96 and then to the pattern target at $309. This bullish view will invalidate if the price turns down and plummets below $168.

Chainlink (LINK) remains stuck in a range between $24 and $32. The rebound off the support of the range has reached the 50-day SMA ($29) where the bears may offer some resistance.

The flat moving averages and the RSI just above the midpoint do not project a clear advantage either to the bulls or the bears. The indicators suggest the continuation of the range-bound action for a few more days.

On the other hand, if the bulls can drive the price above the moving averages, the pair may rally to $32. A break above this level will increase the possibility of the resumption of the uptrend.