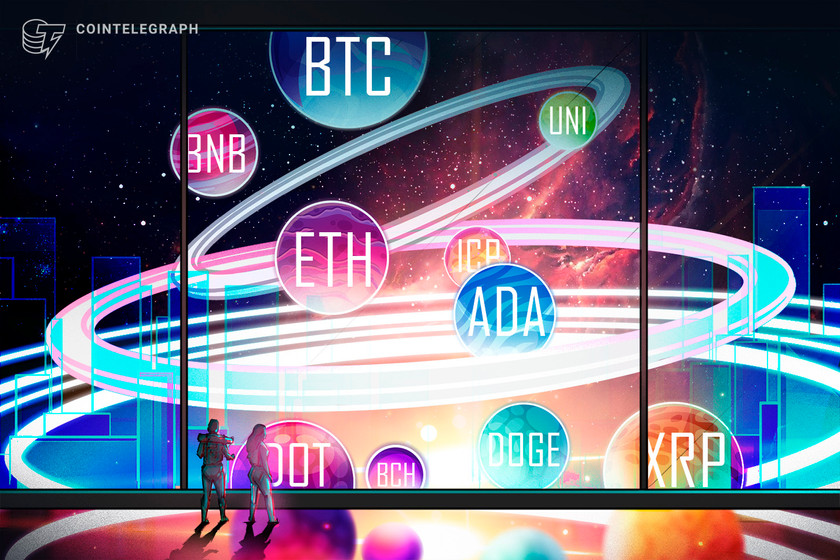 Continued selling at overhead resistance levels suggests that Bitcoin and altcoins could remain range-bound in the short term.

Bloomberg senior commodity strategist Mike McGlone believes Bitcoin (BTC) is more likely to turn up and rally to $100,000 rather than correct to $20,000. In the June edition of the Bloomberg Galaxy Crypto Index report, McGlone said that Bitcoin’s correction had not dented its foundation and it was “stronger, greener and less extended” than in April.

While Bitcoin has yet to witness a surge in demand, data from Coinshares show crypto funds have turned the corner and after two weeks of outflows, investors have pumped $74 million into cryptocurrency.

Ether (ETH) products were leading the inflows with $47 million being pumped into them. Altcoins such as Cardano (ADA), Ripple (XRP) and Polkadot (DOT) each experienced more than $3 million in inflows.

Novice traders seem to be in a hurry for the next leg of the bull move to begin. However, that is unlikely to happen quickly because after the recent market reset, the transfer of assets from weaker hands to stronger hands will take time. The reactions to Elon Musk’s tweets show some froth still remains.

The crypto market may remain volatile as long-term investors are accumulating on lower levels but stopping their purchases at higher levels. Let’s analyze the charts of the top-10 cryptocurrencies and determine the critical support and resistance levels to watch out for.

Bitcoin rose above the resistance line of the symmetrical triangle on June 3 but the bulls could not push the price above the 20-day exponential moving average ($39,856). This suggests the sentiment remains negative and traders are selling on relief rallies.

The bears have pulled the price back into the triangle and they will now try to sink the price below the support line of the triangle. If they succeed, the BTC/USDT pair could retest the critical support zone at $30,000 to $28,000.

If this zone cracks, panic selling may set in and that could result in a drop to the next major support at $20,000. Such a deep fall could delay the start of the next leg of the uptrend.

The first sign of strength will be a breakout and close above the 20-day EMA. That will suggest the sentiment has improved and bulls are buying at higher levels. The rally could then extend to the 50-day simple moving average ($48,192).

Ether broke above the resistance line of the symmetrical triangle on June 3 but the bulls could not push the price above the 50-day SMA ($2,895). This may have attracted selling from short-term traders and the price dipped back into the triangle today.

The flat moving averages and the relative strength index (RSI) near the midpoint suggest a few days of consolidation. The pair could remain stuck inside the triangle for a few more days.

A breakout and close above the 50-day SMA will signal the start of an up-move that could reach the 61.8% Fibonacci retracement level at $3,362.72. Conversely, a break below the triangle may result in a retest of the critical support at $1,728.74.

Binance Coin’s (BNB) relief rally hit a wall near the overhead resistance at $423.83 on June 3. This suggests the bears are defending this level and the bulls will have to push the price above it to gain the upper hand.

If the BNB/USDT pair rebounds off the trendline, it will suggest the formation of an ascending triangle pattern, which will complete on a breakout and close above $433. This bullish setup has a target objective at $586.

The flattening 20-day EMA ($400) and the RSI just below the midpoint suggest a few days of range-bound action. This view will invalidate if the bears sink the price below the trendline. That could open the doors for a drop to $211.70.

Cardano turned down from just under the $1.94 resistance today, suggesting the bears are defending this level aggressively. However, the long tail on today’s candlestick suggests the bulls are buying on dips to the moving averages.

The buyers will now make one more attempt to drive the price above the overhead resistance. If they succeed, the ADA/USDT pair could pick up momentum and challenge the all-time high at $2.47.

Alternatively, if bears sink the price below the trendline, the ADA/USDT pair could slide to $1.59 and then to $1. A strong rebound off this support will suggest the pair could trade inside the large range between $1 and $1.94 for a few days.

The flattish moving averages and the RSI near the midpoint also suggest a few days of consolidation.

Dogecoin (DOGE) turned down from $0.44 on June 2, suggesting that traders are closing their positions on rallies. The bears have pulled the price below the 20-day EMA ($0.37) today, indicating weakness.

The flat 20-day EMA and the RSI near the midpoint suggest a balance between supply and demand.

If the DOGE/USDT pair continues its slide and breaks below the neckline of the head and shoulders pattern, the selling could intensify. The bulls may try to arrest the decline at $0.21 but if they fail to do so, the pair may drop to $0.10.

This negative view will nullify if the price bounces off the neckline and rises above $0.47. Such a move will indicate the bulls are back in the driver’s seat and the pair could then rally to $0.59.

XRP’s failure to rally above the 20-day EMA ($1.06) suggests the sentiment remains negative and traders are selling on rallies. If the bears sink the price below the trendline, the decline could extend to $0.79 and then to $0.65.

Contrary to this assumption, if the price rebounds off the trendline, it will signal strength. If the bulls push and sustain the price above $1.10, the XRP/USDT pair could rise to the 50-day SMA ($1.27) and then to the downtrend line.

Although Polkadot rose above $26.50 on June 3, the long wick on the day’s candlestick suggested selling by traders at higher levels. The altcoin has turned down today and broken below the $26.50 level.

The bears will now try to pull the price down to the trendline. If this support holds, the DOT/USDT pair could again rally to $26.50. If the bulls sustain the price above this resistance, the pair may rise to the 50-day SMA ($32.64).

Conversely, if the bears sink the price below the trendline, the pair could drop to the $15 support. If the price rebounds off this support, the pair could remain range-bound between $15 and $26.50 for a few days.

Uniswap (UNI) has again turned down from the 20-day EMA ($28.14) today, indicating the bears are aggressively defending this resistance. The sellers will now try to pull the price down to the support at $21.50.

The bulls are likely to defend $21.50 aggressively as they had done on May 30. A strong rebound off this support will confirm the formation of a higher low. The UNI/USDT pair could then remain range-bound between $21.50 and $30 for a few days.

This neutral view will be negated if the bears sink the price below $21.50. That will suggest the sellers have overpowered the buyers, resulting in a drop to $16 and then to $13.04.

After trading in a tight range between $103.71 and $120 for a few days, Internet Computer (ICP) broke above the overhead resistance on June 3. However, the long wick on the day’s candlestick shows the bears used this rally to sell and trap the aggressive bulls.

The ICP/USDT pair turned down sharply today and the bears are now trying to pull the price below the $103.71 support. If they succeed, the pair could drop to the all-time low at $86.01. This is an important support to watch out for because if it cracks, the pair could decline to $60.

However, if the bulls defend the $103.71 support, it will suggest accumulation at lower levels. The buyers will have to sustain the price above $120 to signal the possibility of a consolidation between $103.71 and $168.

The relief rally in Bitcoin Cash (BCH) turned down from the downtrend line today, indicating the bears are defending this level aggressively. The downsloping 20-day EMA ($780) and the RSI in the negative territory suggest the bears are in control.

If bears sink the price below $616.04, the altcoin could drop to $468.13. This level may act as a strong support. If the price rebounds off this level, the bulls will make one more attempt to propel the price above the downtrend line.

0
0   0
previous To ICO or to IDO? That is the question
next Bitcoin 2021 conference Miami: Here’s what you missed so far